WHO: These 12 bacteria pose greatest risk to human health

Twelve types of bacteria were deemed 'priorities' in urgent need of new antibiotics, according to a list released by the World Health Organization on Monday.

The first list of its kind, it highlights bacteria that global health experts believe pose the greatest threats to human health. The WHO is calling on governments and pharmaceutical companies to prioritize the development of new drugs against them.

Factors used to determine the bacteria posing the most risk included the levels of resistance seen already, the mortality rates of these bacteria today, their prevalence out in communities and the burden they place on health systems.

Topping the list were bacteria classed as "gram negative" bacteria, which have already shown resistance to multiple drugs.

These include Acinetobacter baumannii and pseudomonas aeruginosa, which are predominantly linked to hospital-acquired infections or infections in healthcare settings, such as nursing homes, and in patients who require equipment such as ventilators or blood catheters, which can become contaminated.

Enterobacteriaceae, which include bacteria such as E.coli and klebsiella, were listed third and also pose a greater threat in healthcare settings. 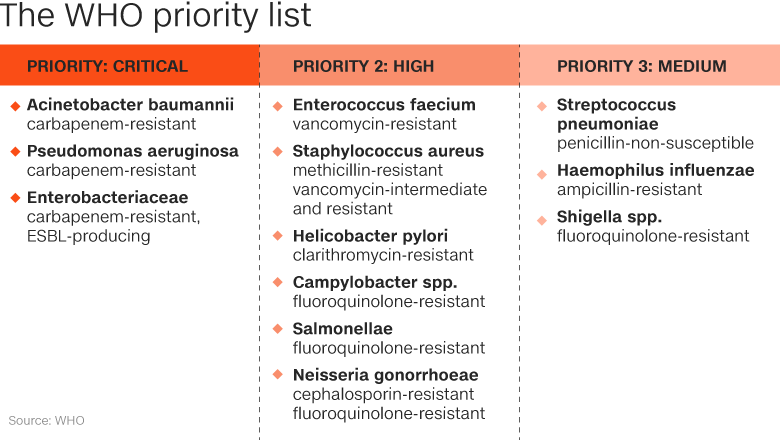 In the United States, one in 25 hospital patients are estimated to have at least one hospital-acquired infection, according to the US Centers for Disease Control and Prevention.

Globally, antibiotic resistance has been seen in every country, according to WHO, and drug-resistant bacteria are estimated to cause 700,000 deaths each year. If no action is taken, they are expected to kill 10 million people annually by 2050.

The risk of death from a resistant pathogens is two The top three bacteria listed have shown resistance against multiple antibiotics, including those known as carbapenems, which are considered to be the most effective against multi-drug resistance.

WHO has released its list in hope of guiding and promoting the research and development of new drugs -- which can take as long as 10 years to reach the market.

"The (drug) pipeline is practically dry," Kieny said during a press conference, adding that new antibiotics are difficult to develop. She also highlighted the fact that antibiotics are typically used as short-term treatment, not long-term, meaning they have less market incentives to pharmaceutical companies.to three times greater said Dr. Carmem Pessoa da Silva, coordinator of antimicrobial resistance at WHO.

The bacteria listed are divided into three categories based on the urgency with which new antibiotics are needed against them. They're classified as critical, high and medium priority.

"The top three (bacteria) have nothing to treat them," said Dr. Vicky Enne, a clinical microbiologist at UCL in the UK.

Though Enne did not help with the final list, she agrees that these 12 types of bacteria are the ones in need of most attention, adding that the top three types on the list currently require use of a less than ideal drug, known as Colistin, to treat them. "At the moment, (Colistin) is the antibiotic of last resort ... but resistance is also becoming more common," she said.

The second and third groups name bacteria that are increasingly showing resistance against the main drugs used against them, but which still have a few options remaining. "These still have some drugs to fight them ... but doctors are being forced to use last resort drugs because resistance levels are so high," Enne said.

Salmonella and gonorrhoea are included among those considered a high priority, as well as campylobacter and helicobacter pylori, which cause food poisoning and gastritis, respectively.

Enne believes the drugs named in these lower groups also require the development of better rapid diagnostics so any resistance can be identified immediately, meaning drugs are not used unnecessarily.

"This fuels more resistance," she said.

Tuberculosis is a bacterial disease showing extreme resistance today, with some countries reporting cases with total resistance. WHO agreed with TB being a lead priority but left it off the list as it has its own arm of specific research and development to address the issue.

The issue of resistance has received attention in recent years. It was addressed during the United Nations General Assembly in 2016 and an independent review on antimicrobial resistance, commissioned by the UK government, concluded last year with a list of priorities to target the problem. But new drugs are still yet to be identified.

"This shows that WHO see antibiotic resistance as a major global challenge. Hopefully this will focus efforts on these areas of greatest need," said Dr. Andrew Edwards, a molecular microbiologist at Imperial College London, who believes governments must also set policies in place to support drug development. "There's no point having these drugs if there are no policies in place."